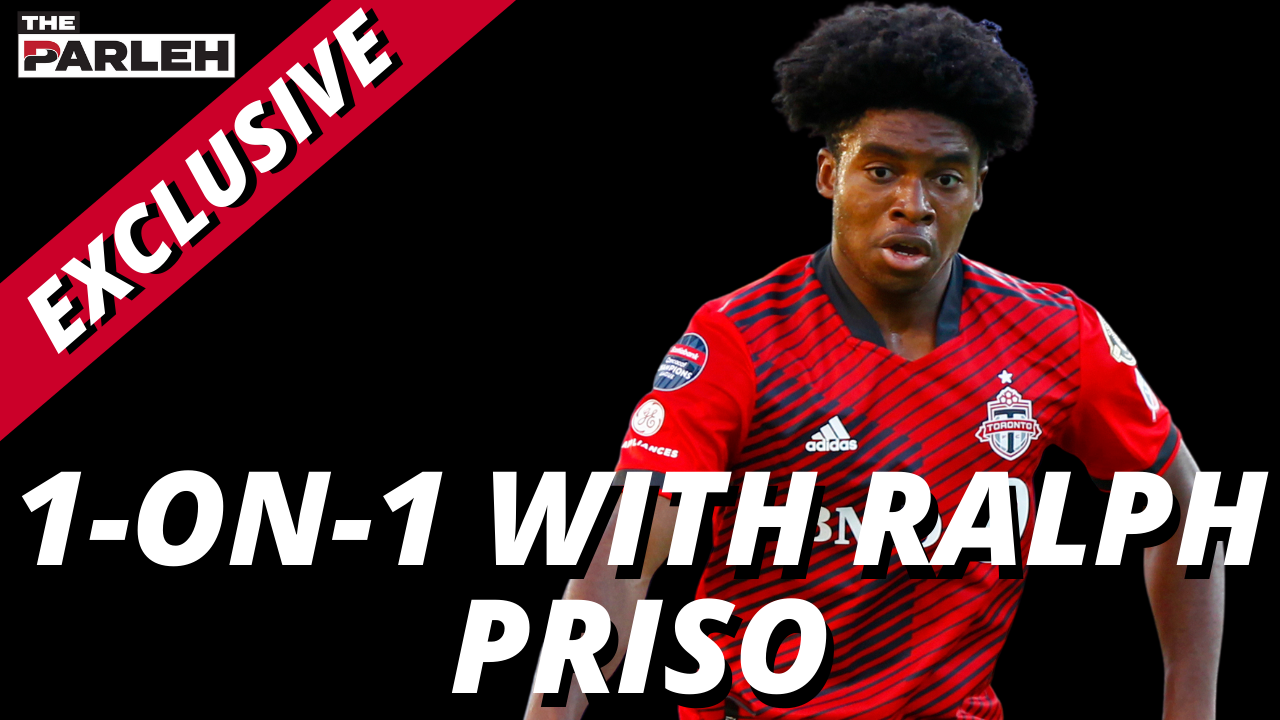 'There's a light at the end of the tunnel': 1-on-1 with Ralph Priso

It’s been a challenging nine months for Toronto FC’s Ralph Priso, but the 19-year-old vows to come back stronger.

“No one is harder on me than myself, but no one believes in my abilities more than myself as well,” Priso told The Parleh from the BMO Training Grounds on Thursday. “I know what I’m capable of, I just have to get through it, get my confidence back, and things will start rolling again.”

On August 14, the box-to-box midfielder underwent season-ending right-ankle surgery following a play he believes never should have happened.

He limped off after making a goal-line clearance in the 67th minute in a 2-1 loss to the New England Revolution and had to be helped back to the locker room.

It was only after his goal-saving play that the linesman raised his flag for offside.

“Before I got hurt, I thought I was going in a good way,” he said. “I was finally starting to get some starts, consistent football, consistent full matches almost, so that was good, and then obviously the injury happened – even more frustrating on a play that for me shouldn’t happen, but there’s nothing I could do about that, so I try not to focus on it too much.”

Prior to his season-ending injury, Priso was in good form, turning heads in the middle of the park. He was one of the few bright spots in an otherwise dark and gloomy year for Toronto FC.

“I think whoever was making that decision — that decision of giving that extra time before putting the flag up — they have to re-evaluate that rule because right now, it’s costing us a player who was in great form,” said a frustrated Javier Perez, who was interim head coach at the time.

Priso made 15 appearances for Toronto FC in all competitions last season before going down injured and was in line to play an important role for the Reds down the stretch.

But not only did the injury cost him the rest of his breakout season, it cost the Scarborough-born midfielder opportunities beyond TFC, including a potential stint with the Canadian men’s national team during their recent World Cup Qualifying run.

“But yeah, I mean it’s part of it. I think I just have to keep going, get myself out of the rut.”

Determined to bounce back, Priso worked hard in the offseason to ensure he’d be ready for the start of training camp. And to his credit, he was.

But with that came the challenge of having to win over his fourth coach in two seasons following Toronto FC’s appointment of Bob Bradley as head coach and sporting director.

Greg Vanney knew Priso well and the two had a good relationship, making the teenager’s transition to the first team easier in 2020. After Vanney left ahead of the 2021 campaign, the homegrown midfielder quickly won over Chris Armas, starting six of the club’s first seven matches that year – including both games in the Concacaf Champions League during Toronto’s two-leg triumph over Club Léon.

And then after Armas was relieved of his duties, Priso once again earned the trust of a new manager, evolving into one of TFC’s most important players under Perez.

But now – once again – it’s back to square one.

“It happens. It’s not been bad,” said Priso, when asked about Toronto FC’s coaching carousel. “It’s just that I play in a spot where there’s a lot of competition. Spots are hard to come by in the midfield, so I just have to keep myself going and then when I get the opportunity [I have] to show Bob that he should play me.”

Overall, it's been a tough start to the 2022 season for the 19-year-old, who was hoping to build off last year’s success. A calf injury saw him sidelined for a few matches, but 11 games into the season, he has only been on the pitch for 51 minutes so far.

There were expectations that Priso set out for himself with Bradley coming in, but so far, he hasn’t reached those heights yet.

Opportunities have been few and far between so far for the youngster, but when he finally did get a chance to shine last week against FC Cincinnati, things went from bad to worse. Making his first start of the season due to an abundance of injuries in Toronto’s midfield – a big opportunity for Priso to impress his new boss – he was sent off just six minutes into the game following a high tackle on Cincinnati midfielder Obinna Nwobodo.

Priso says in that moment, the struggle of the last nine of 10 months came back into his head a little bit.

“You finally get the chance, and then it’s not even like I played and put in a bad performance, it’s just something so quick that’s just a split-second decision that’s just the wrong one and it all just goes away,” he said. “And then you just deal with it, honestly. It was tough for the rest of that day and the next day, but I’ve put it behind me now so I just have to keep going.”

A few days after the play, TFC captain Michael Bradley spoke to Priso, pointing back to a time when he was playing in Holland with SC Heerenveen. Bradley recalled going to a big away game at Ajax as a 20-year-old in one of his first years with the club, and he picked up two yellow cards within 39 minutes, leaving the team –  in a difficult environment to play – in a really tough spot.

“It’s all part of it,” said Bradley. “All pros, all athletes – any sport – go through periods where things are difficult, whether it’s injuries, whether it’s [being] out of a favour with a certain coach – anything. And then when you add in the fact that he’s still a younger player, yeah, it’s all part of growing and maturing.

“Everyone inside the club feels so strongly about Ralph as a man, as a player, and so we’ll all continue to find the right ways to help him. It's been a difficult stretch for him, but I still see him coming in everyday ready to work, ready to try and push himself, and so there’s no doubt in my mind that he’ll come out better and stronger for all of this.”

Hearing that sort of support from a player as experienced and as decorated as Michael Bradley means a lot of Priso, who looked up the TFC captain as he came through the academy.

Priso also received a show of support from Bob Bradley on Friday.

“Ralph was out for a while, and for sure, he felt badly after the early Red Card,” said Bradley. “Everybody supports him around here, and now we’re ready to keep going with him. It’s a young player that came off a difficult injury, and we believe that he can be a really good player, so we’re excited to get him back onto the field.”

Priso says he’ll look back at this recent stretch of adversity and learn from it, like he’s done countless times in the past. He looks back at some of his days with the TFC Academy when he wasn’t playing or wasn’t in the XI. Even before his academy days, the youngster faced adversity trying to get a chance with his hometown club.

He was cut from the TFC Academy on three separate occasions before finally breaking through at the age of 14, and four years later, he was starting a Concacaf Champions League down in Mexico match for the first-team.

Overcoming obstacles isn’t anything new for Priso, and this is just another bump in what will be a very, very long and bright road ahead.

“There’s light at the end of the tunnel,” he said. “I just gotta keep going, keep working, keep my head up, and then good things will come again like they had in the past.”

With a flurry of injuries to Toronto’s midfield once again, look for Priso to be given an opportunity to bounce back on Saturday when TFC takes on Orlando City SC at BMO Field.