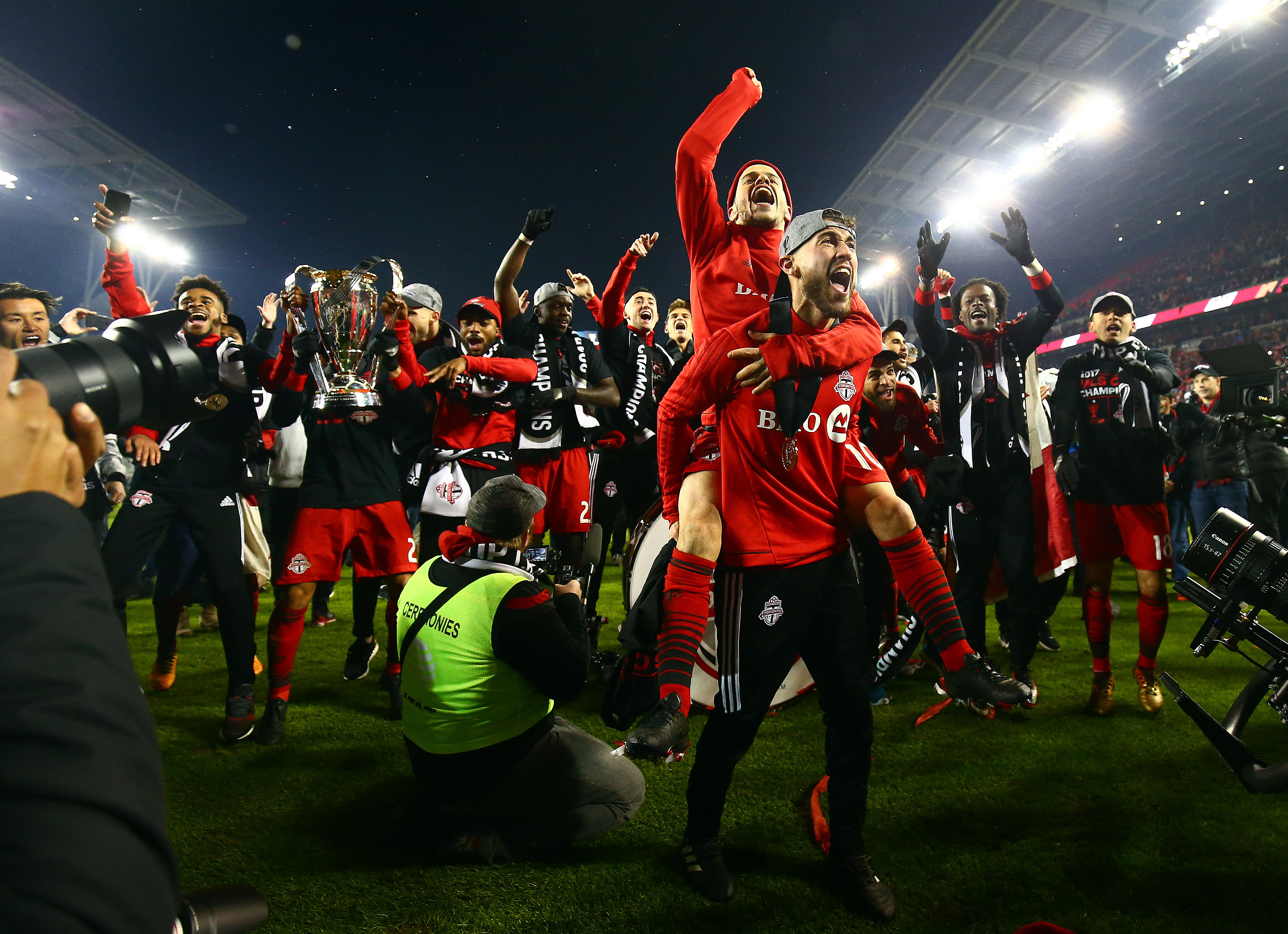 Jonathan Osorio could make his 300th appearance for Toronto FC this weekend when the Reds head to Queens, NY to take on the defending MLS Cup Champions New York City FC at Citi Field. This is New York’s first match of the season at Citi Field – the home of Major League Baseball’s New York Mets.

Having been with TFC since 2012, Osorio, the all-time leader in appearances made for the club, would become the first member of Toronto FC to reach the illustrious milestone, but the veteran midfielder’s status is up in the air after he was forced to leave last weekend’s match early in the second half with an apparent thigh injury.

“We need to see,” said manager Bob Bradley. “He’s been in parts of training, so it’s going to be a decision as we go through tomorrow and as we get closer to the game.”‍

“It’s nice for me to see that he is appreciated the way he is with the fans here in Toronto because he deserves it,” added Bradley. “He’s a really good player, he’s smart, he does a lot of little things to help the team.”‍

READ MORE: Build the Statue: Jonathan Osorio’s legacy with club, country is like no other‍

This will be the second time in three weeks that Toronto (3-2-2) and NYCFC (2-3-1) square off with the Reds picking up a 2-1 victory at BMO Field earlier this month thanks to a goal from Jesús Jiménez and an own goal from defender Thiago Martins.

TFC got the better of New York on that day, but it won’t be the same New York City FC team the Reds saw earlier this month.

While Ronny Deila rolled out a strong Starting XI following the international break, his side was also preparing for their CONCACAF Champions League semi-final tie, prioritizing their upcoming two-legged matchup with the Seattle Sounders. As TFC fans have seen in the past, amid a CCL run, a team’s form in the league could take a hit, and that could be attributed to what happened with New York.

And after a slow start to the regular season – going goalless in his first five MLS matches – last year’s leading scorer and MLS Golden Boot winner Valentin Castellanos found the back of the net four times. For what it’s worth, no TFC player has scored more than once in a match this season.

“He is developing his play all the time,” said the NYCFC manager on Castellanos. “Getting on the ball, switching the play, and getting assists. I like him as a target man, centre of the pitch pushing central defenders, but it is also great having him drop deeper and help with link-up play. He is getting better and better every game.”

“Coming off the elimination from the Concacaf Champions League, we were a little hurt but now we have to look forward to MLS; I’m very happy for the four goals,” said Castellanos following Sunday’s win. “This victory gives us a lot of confidence going forward.”

Heading back to Citi Field this weekend. Quick reminder of what went down on our last trip to Queens 👇👇 pic.twitter.com/LwLefNq3DB

In a similar light, New York will likely see a more confident team roll into Citi Field on Sunday afternoon. The Reds are unbeaten in their last four games, picking up three wins over that span – including an impressive 2-1 victory over the league-leading Philadelphia Union last time out.

Toronto hasn’t gone unbeaten in four straight matches since October/September 2020, as new Head Coach and Sporting Director Bob Bradley looks to have the team finally clicking after a dreadful 2021 campaign.

“I just think overall you see the package of ideas getting stronger,” said Bradley. “I see the overall ideas of the team improving … I see little things that need work every day in training, every game, so it’s the process. Improvement, but still a ways to go.”

2020 MLS MVP Alejandro Pozuelo has looked a lot closer to his 2020 self as opposed to last season, when he had one goal in nineteen appearances. In seven matches this season, the attacking midfielder has registered two assists and scored twice – including a golazo in Toronto’s recent win over Philadelphia.

Pozuelo looks healthier and more engaged so far this year, and part of that could be due to his supporting cast up top: newcomer Jiménez. In his first season in MLS, the 28-year-old striker already has four goals and one assist to his name and has shown a strong understanding with his fellow Spaniard Pozuelo.

“Clinical,” said goalkeeper Alex Bono on Jiménez following Toronto’s win over the weekend. “And that was some sort of classy finish today, it really was, for him to back off like that and have Oso find him and one touch, just leaning back and put it in the far corner.

“He's a joy to watch and he's a joy to train with and he's working his ass off all the time. So, to see that, to see him come in and continue to put goals on the board for us is huge.”