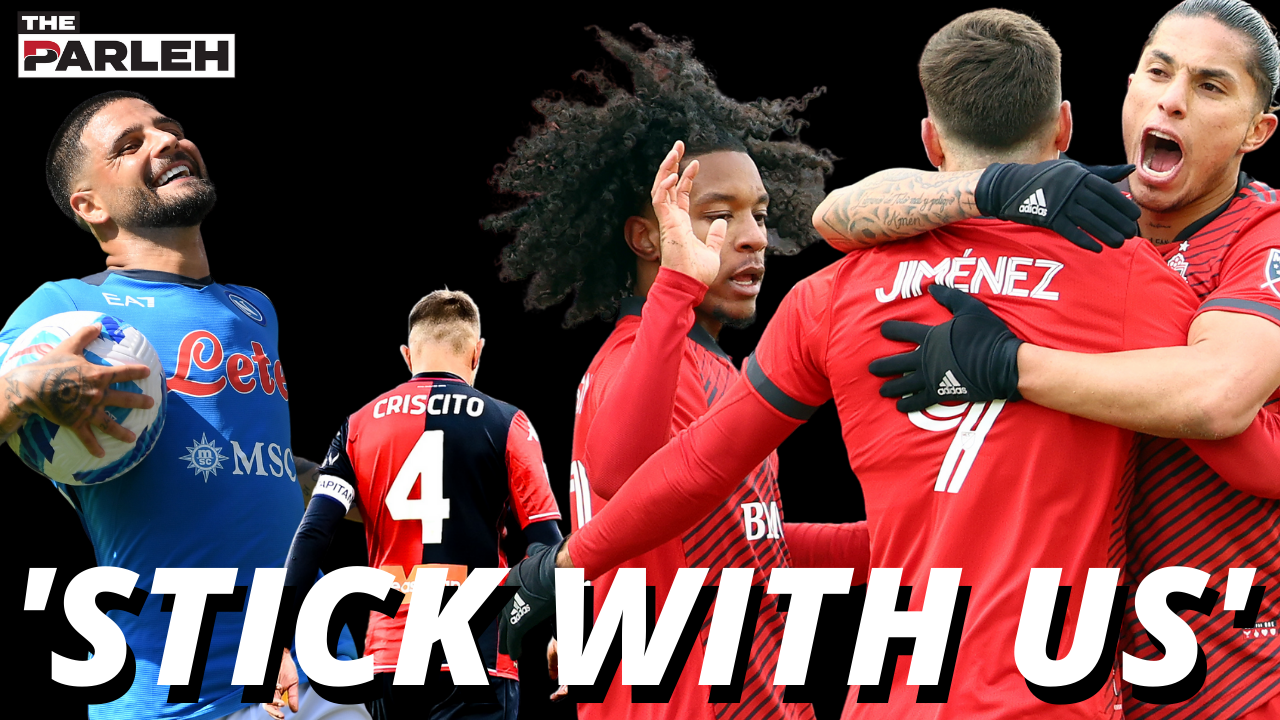 Over a third of the way into the 2022 Major League Soccer season and once again Toronto FC find themselves near the bottom of the Eastern Conference table.

On the heels of a heartbreaking 1-0 defeat to Orlando City SC over the weekend, Toronto has now lost five-straight games, picking up just 11 points from their first 12 matches.

They’re on the wrong side of history right now, and after last year’s agonizing season – arguably their worst in franchise history when you consider the expectations of the group – it’s understandable that fans are beginning to get impatient with the reds.

But this year feels different than last year. There’s genuine reason for optimism – and it’s beyond Lorenzo Insigne’s impending arrival next month.

Bob Bradley is asking fans to ‘stick with’ the club, and here are five reasons why they should.

And no one is taking advantage of that fact more than Toronto FC right now.

“It’s great when you have talented domestic players that are now ready to step into the first team,” said Bob Bradley at the BMO Training Ground earlier this season. “Our ability to build the best team possible and to continue to evolve has to take into account what’s going on in Canada.”

Last season, Toronto FC’s Canadian players were on the pitch for 8,393 out of a possible 33,503 minutes – or 25 per cent – under managers Chris Armas and Javier Perez in a season that many perceived to be a developmental year.

If Toronto FC don’t lead the league in homegrown minutes played, they’re certainly in the top three, and in fact, when looking at the average age of players who have logged minutes in 2022, Toronto FC are the second youngest in Major League Soccer (23.68 years as of Week 11).

“Stick with us,” said Bradley on his message to the fanbase after Toronto FC’s fifth consecutive defeat on Tuesday. “You see young guys, players that have come through starting to get opportunities. We said at the beginning, the early part of the season meant that these guys were going to be on the field.”

Jayden Nelson and Jordan Perruzza have already logged more minutes in this season than their entire career, while first-year MLS pros Luca Petrasso, Lukas MacNaughton, Kosi Thompson, Kadin Chung, Deandre Kerr, and Themi Antonoglou can say they’ve all experienced the game – in a significant way with the exception of Antonoglou – at the MLS level.

Add in Jacob Shaffelburg and Jahkeele Marshall-Rutty getting game time at fullback for the first time in their careers, making them more versatile moving forward, and suddenly Toronto’s depth looks like it could be a real asset – once reinforcements arrive of course, but more on that later

Young players won’t be afforded this same opportunity in the summertime, though the groundwork that’s being set right now will hopefully be beneficial to them and the club in the long term.

And what a time to get it. 2-2. pic.twitter.com/QWR0cOFmwW

With 18 players departing the club before the start of the season and only 10 coming in, the majority of which were young and inexperienced, it was always going to be difficult for this team to get results in the first part of the year.

But then they got hit with a flurry of different things – injuries, health and safety protocols, and suspensions – all at the same time and the task at hand became even harder.

The last three games Toronto has missed eight first-team regulars, important players at times too, like Alejandro Pozuelo, Carlos Salcedo, Chris Mavinga, and Jonathan Osorio. The team was already shorthanded to begin with, but they’ve been even more thin in recent games.

Nevertheless, they’ve managed to stay in matches, and would’ve come away with a point in each of their last two games had they not conceded late injury-time winners.

“It's a big effort,” said Bradley on Saturday. “It's guys giving everything they have, helping each other on the field, things that hopefully will help us down the road in the moment as we grow. You can’t have words for these guys because … lately, [we] can't really find a way to get ourselves a break. … With the number of guys out and with the different factors, you just call on everybody to be ready and give what they have, and I sure thought they did that.”

The good news is that it looks like TFC are getting bodies back. Achara was back in full training on Tuesday, while Alejandro Pozuelo, Jonathan Osorio, and Jacob Shaffelburg were each getting reps in on their own, as was Jahkeele Marshall-Rutty for the first time following knee surgery, which has kept him out for about seven weeks.

Toronto FC were on a four-game unbeaten run, including wins over New York City FC and the Philadelphia Union, before being hit with the injury bug.

Anyone that watched Toronto FC last season could see that the group was dysfunctional and lacked a clear identity on the pitch. They went away from being a possession-based side that enjoyed playing with the ball to a high-tempo, counter-pressing side whose identity did not mesh well with their personnel.

After Chris Armas was dismissed in July, interim coach Javier Perez inched them closer to their old self, but with his status up in the air, there was always a bit of uncertainty regarding the team’s identity.

Under Bob Bradley, it’s crystal clear what the players are being asked to do.

“The vision that I think we all have for this team is to be a team that's good with the ball, has moments of smart possessions, still finding different ways to go forward, finding moments to press, and then moments to make sure that we're very compact,” laid out Bradley earlier this season.

‍READ MORE: BIG READ: Bob Bradley proving in his early days in Toronto that he is the real deal

“We always have an idea of how we want to play and what roles everybody has on the team,” said defender Lukas MacNaughton, when asked about life under Bradley. “It’s very game-like and pushes you to really know what role you have in the game situation.”

Even with the inexperienced roster, Toronto ranks fifth in passes completed, third in accurate forward zone passes, sixth in assists, and tenth in possession. They’ve only been out possessed on four occasions this season, including once against FC Cincinnati when they went down a man six minutes in the match.

Toronto kept over 60 per cent possession in two of their matches all of last season. They’ve already reached that mark twice through the first 12 games this year – and again, that’s with a shorthanded and inexperienced roster.

They’re playing better football and the hope is that the groundwork that’s being laid now will only get better as the season wears on.

The Emergence of Jesús Jiménez

Toronto FC had no real goal-scoring threat last year. Jozy Altidore was in and out of the lineup for various reasons, Ayo Akinola was sidelined for the remainder of the year in July, while Patrick Mullins and Dom Dwyer combined for a grand total of 0 goals in 39 appearances.

The need to add a consistent No. 9 was essential this offseason, and it’s scary to think where the team might be had it not been for the acquisition of Jesús Jiménez.

In a move that seemingly came out of nowhere, TFC acquired the 28-year-old striker in the middle of preseason for a reported fee of $600,000 from Górnik Zabrze, where he spent four seasons in Ekstraklasa – Poland’s top flight. Jiménez put pen to paper signing a three-year contract with a team option for a fourth in a deal that looks like it’ll go down as one of the best TFC has made in recent years.

With seven goals to his name, the Spanish striker has scored or assisted on half of TFC’s 16 goals this season. His seven goals through the first nine games were the most ever by a TFC player at that point in the season. He’s gone goalless in his last three, but Jiménez is still tied for second in the league’s Golden Boot race.

With Ayo Akinola inching closer to full fitness, Jiménez providing a steady goal-scoring punch, and even more help on the way up top, Toronto should have no problem putting the ball in the back of the net this season.

Two goals in the first half so far for Jimenez and this one is a beauty. 😍 pic.twitter.com/JXFHvV1Lxd

Help is on the way

Through the first half of the season, Toronto FC have been playing with house money.

When you consider the turnover of the roster and how much the team would have to lean on the kids, the plan was never for the Reds to be able to compete in the first half of the year.

“We always knew that in the first part of the season as we were certainly waiting for [Lorenzo] Insigne and waiting to see how other things might develop for the summer, there was going to be opportunities for the young players,” said Bradley.

There’s now just five-to-six games before help arrives – and the hole that Toronto has dug themselves isn’t that deep. As of Wednesday, Toronto are just four points out of a playoff spot in the Eastern Conference with two thirds of the year still to play.

Insigne, the league’s most expensive player, is a game changer for Toronto, and he’s not coming alone. Sources indicate that former Italian national team defender Domenico Criscito will be joining his good friend Insigne in Toronto this summer – and TFC will also make one more significant addition as well.

Mattia Destro has been on the club’s radar for months, while the team also had serious discussions with Dries Mertens over the offseason before talks fell apart.

Once Toronto FC gets healthy, and you add Insigne, Criscito, and one more quality player into the squad – watch out. TFC could be a real dark horse in the summertime, but more importantly, long-term the future is bright.